A "GD" boycott on Grant Morrison and Action Comics? 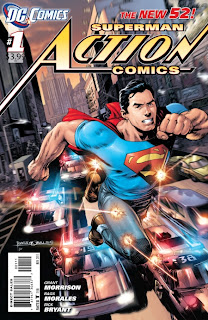 Every once in a while, I stumble across a story that, due to the sheer ridiculously absurd nature of it, starts to give me a migraine.  This morning, it was a piece at Comic Book Resources reporting that a North Carolina comic retailer was launching a boycott of DC's new Action Comics series and its writer, Grant Morrison.  So what sort of pernicious plot could have possibly been perpetrated in the pages of this periodical to provoke such a passionate proposition? (Ahh ... alliteration. Gotta love it.)   It's all because of a single panel that, according to Jeff Lamb, owner of aptly named Asheboro, NC comic shop, The Comic Conspiracy, shows DC's newest version of the Man of Steel in a blasphemous light.

Is Morrison's Superman flying around Metropolis spewing out bile and hate in the "New 52"?  Not quite. In fact, not even close.  Instead, the panel in question doesn't even have Supes uttering a single complete word.  Instead, it's just two little letters that have riled Lamb up as "a slap in the face to Superman, Christians and Superman creators Siegel and Shuster!!"